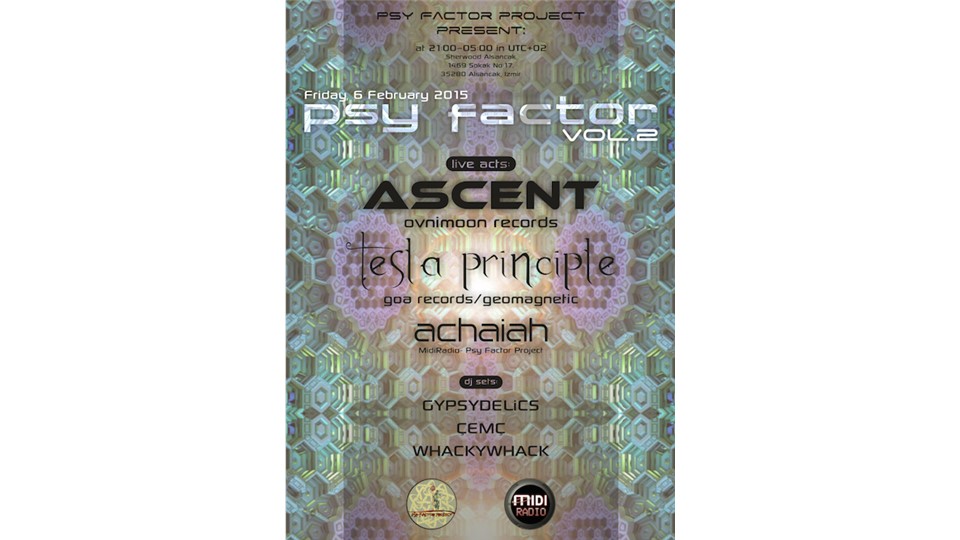 Bojan Stojiljkovic /Ascent/ was born 1987 in town Krushevac, Serbia. He comes from a family of musician and as very young started playing keyboards. When he grew little older, he started playing keyboards in Rock and Blues bands .When he had 20 years, he started his career as a DJ in Psychedelic Trance music. Worked and played psytrance music all around Serbia at festivals and parties. In 2010 he started to produce progressive psytrance and downtempo/psychill music. Ascent has released his albums in several labels; Ovnimoon Records, Goa Records, Plusqam Records,Synergetic Records,Sting Records, Phoenix Groove Records, Tandava Records and also more to come...

He created his psychill/ambient project with his brother Branko aka Argus /born in 1982/ who also plays live instruments (keyboard,drums,bass,guitar..) Together, they moved from town to forest, near Mountain Jastrebac ,where they found inner peace and inspiration in pure nature. They come to the idea of making ambient psychedelic music and focused on deep mystical atmospheres, sounds of nature and beautiful harmonies. Their music contains live instruments like guitars, keyboards, percussions, vocals and so much more…

He created his Psytrance Project: ELgiva with his friend Milan.
In 2009, this two artists created psy organisations and played psy -trance as Dj's all around Serbia at festivals and parties. Three years later, they came to idea to make psychedelic trance music and focused on deep space atmospheres, uplifting and mystical melodies, groovy bass lines and old school ideas, inspired by many famous artists.

In addition, he created his Psytrance-Goa project Demetria with his friend Stefan. Demetria is a psytrance project founded by Bojan Stojiljkovic aka Ascent and Stefan Stefanovski aka Tesla Principle from Krushevac-Serbia. Together, they decided to make something different like mixing so many genres of psychedelic trance music. Demetria is focused on deep atmospheres, mystical goa melodies with groovy full-on bass lines and many mysterious psychedelic effects. Currently, they are working for Geomagnetic Records.

Since last year Ascent he has released over 12 EP’s, Two Albums adding up to 100 + tracks.

Ascent has recently released his album on Ovnimoon Records and has been on the psytrance top charts (TOP 2) on a world psytrance scene.

Ascent have many collaborations with Liquid Sound,Ovnimoon,Shogan Alchemix,Dual Resonance, Elegy, , Argonnight, and also more to come...

Stefan Stefanovski (Tesla Principle, Paradigm, Demetria - Geomagnetic records),
He was born in 1989., in a small city of Krusevac, Serbia.
He has been engaged in music since he was 14.
Until 2007 he played hard core music.
He played the guitar and sang for the band named “Divide Suffer”.
In year 2007., he attended a big trance party for the first time,
and since then electronic music became the object of his intrests,
psychedelic trance specialy.
From 2008 until 2011 he worked on a few small unpublished projects.
In the year 2012 he started intensive work on the project called Tesla Principle.

is Cosku , was born in 13/06/1987 West of Turkey.He is a Label Dj at littleBIGsensations Record Label. His career as a musician started with playing bass and guitar in Nu-Metal bands at 2005. He played bass guitar and has given many concerts with a nu-metal band between 2005 to 2007. He was also interested about psytrance back then but he started djing at 2008. During 2009 he was playing at psychedelic festivals all around Turkey. In 2012 he started to gain international experiences about djing. He played in Germany, Austria,Poland and the Netherlands.

He likes to play Full-On / Full-On Night Trance and Psychedelic Trance. His sets are usually energetic, with strong basslines, industrial percussions, deep atmospheres, many dynamics, and Hi-Tech driving.
He shared stages at parties and festivals across Turkey with artists like,
Cosmosis,Lost&Found ,Aodioiboa,Calamar Audio,Trymbaka,Loose Connection ,and many more...
Whackywhack so far performed at open airfestivals such as ,PsyFiles 2 Journey to Lycia(TR),Pakawala Music Art and Culture(TR) ,KrajobrazoLokum Deep sound of Forest (PL) festival and also many indoor outdoor and private parties all around...And more soon

The Gypsydelics Project was created in 2013 in order to create a unique style and provide innovative energy on the dance floor. With a mixture of psygressive melodic trance and progressive dark, the project consists of productions of the highest quality that blends beautiful melodies and strong basslines, coming to an innovative Progressive Psytrance, that brings to the public completely emotional sensations, and even the atmosphere creates an incomparable tension.With this innovative style, Gypsydelics have stood out wherever they go. 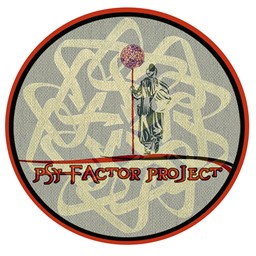 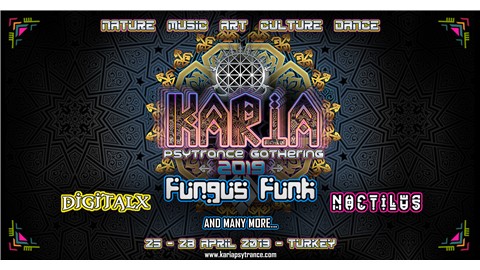 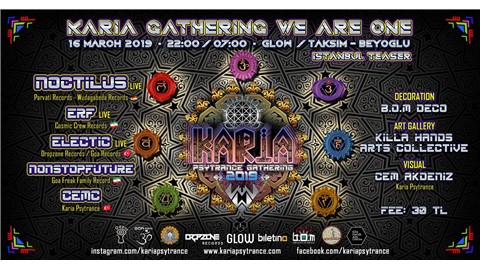 Karia Psytrance Gathering - We Are One - Istanbul Teaser 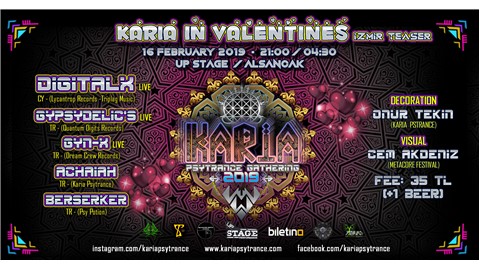